A recent study by Trulia states that when it comes to furry tenants, not all landlords put out the welcome mat.  Bu we’re finding that landlords that allow tenants with pets can collect pet deposits and get topnotch tenants who pay top dollar for rental do to limited availability.  True there’s some risk of damage but in our experience 2 year old children can do juts as much damage

San Francisco, Seattle, Denver, Oakland, Calif., and Portland, Ore., are the most pet-friendly rental markets in the country, according to a report from Trulia.  Here in Northwest Atlanta we are finding that about 40% of the rentals will allow pets albeit with a $250 to $300 per pet deposit!

Cats are the preferred pet among landlords. On a national level, 20% of rental units welcome cats, 18% permit small dogs and big dogs are allowed at 4% of properties, the report found.

Trulia analyzed seven factors to determine the rankings, including the number of listings on its website that allow pets, the costs associated with renting as a pet owner and the concentration of pet-related businesses. The study included properties listed in the 25 biggest rental markets since the start of 2013.

“Just because a landlord explicitly says he or she will allow a pet, doesn’t mean that they will choose a tenant that has a pet,” McLaughlin said. “When all else is equal, a landlord will probably choose someone without a pet just because it minimizes the risk of damage.”

The San Francisco SPCA, a humane society, reports an increase in abandoned pets because their owners can’t find pet-friendly housing.

Dallas had the highest percentage of listings that allow four-legged occupants. And the city is also holding true to its state’s mantra that “everything is bigger in Texas,” with 20% of its listings permitting large dogs. Chicago trails at a distant second at 12%, according to Trulia.

The West Coast also dominated with the most pet-related services. Trulia used Yelp to identify the markets with the highest concentration of pet businesses, and nine of out of the top 10 were close to the Pacific Ocean. San Francisco claimed the top spot with a ratio of 1:817 of pet shops per household. 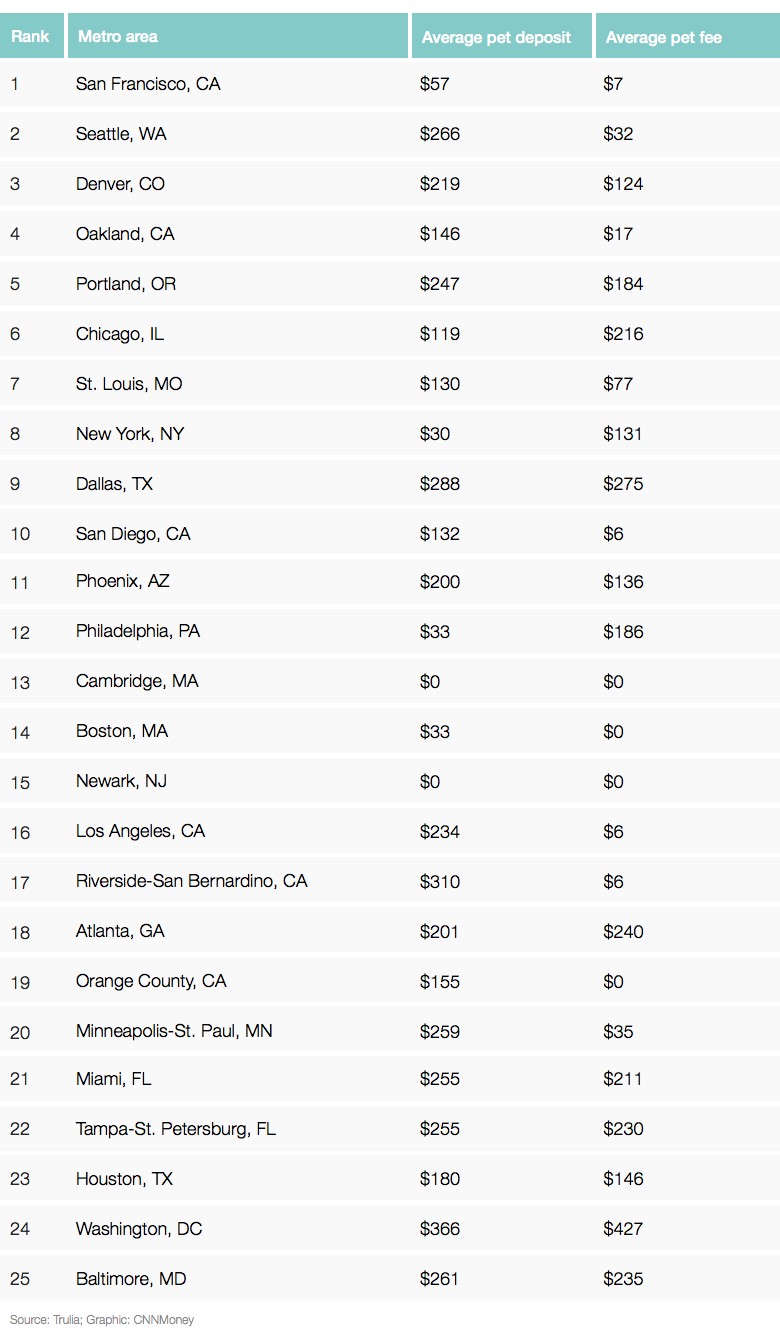 When the pandemic hit in 2020, many experts thought the housing market would crash. They feared job … END_OF_DOCUMENT_TOKEN_TO_BE_REPLACED